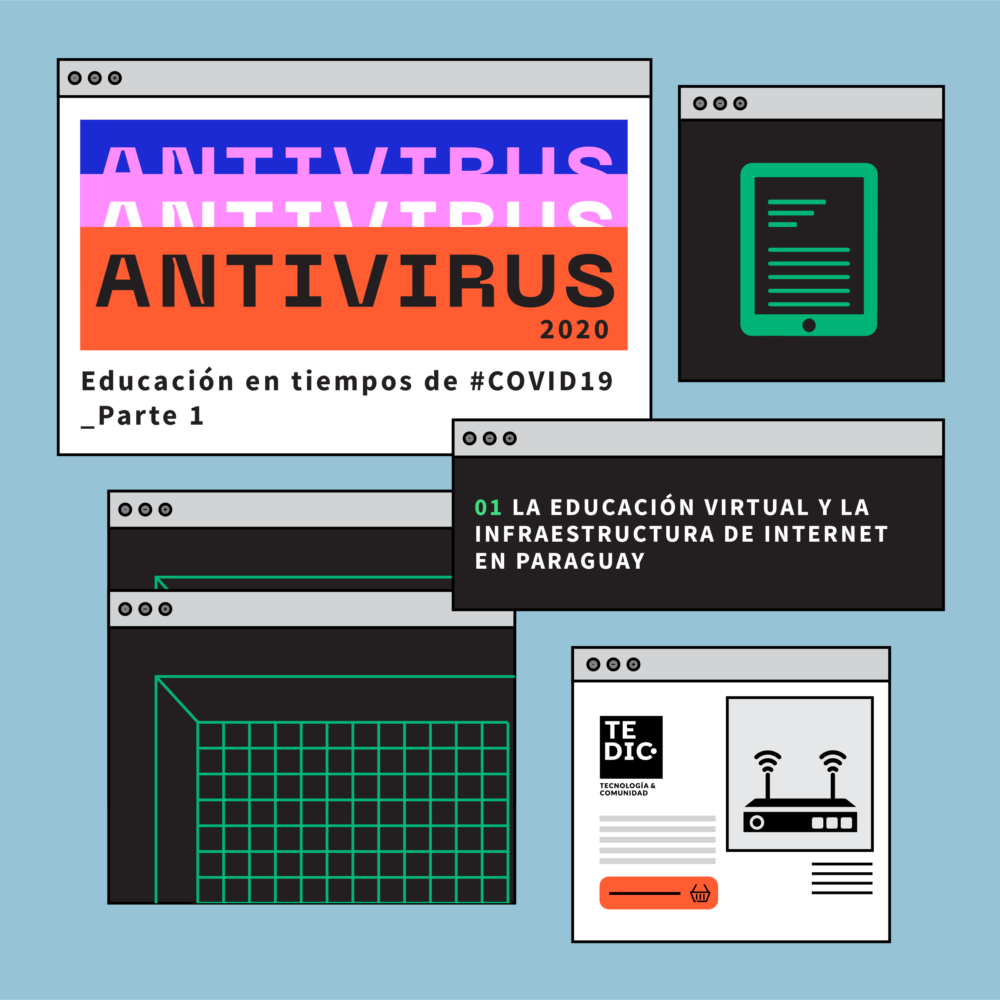 In the context of the health emergency situation, Ministerial Resolution SG 90/2020 of March 10 established measures to mitigate the spread of the coronavirus, which included avoiding the gathering of students in educational spaces. Paraguay, like other countries in the region, decreed a temporary suspension of face-to-face courses, which has since been extended on several occasions. A possible extension until the end of the year is currently being discussed, as expressed by the Minister of Education, Eduardo Petta, in a television interview.

The situation forced our country and the region to look for immediate alternatives in order to keep the education system going, now remotely, which implies a strong demand for the use of the Internet for the availability of educational material and the implementation of online courses.

As a first step, the Ministry of Education (MEC) presented the so-called “Action protocol in educational institutions for the prevention and monitoring of the spread of coronavirus”. This was followed by other measures that included the participation of the private sector, such as the signing of an engagement letter between the MEC and Microsoft Paraguay for the implementation of the online platform “TuEscuela en Casa” (‘Your School at Home’), that would include free access to Office 365 Online for teachers and students, among other initiatives. According to the minister, the platform has the capacity to create 60,000 virtual classrooms (replicating the number of classrooms that currently exist in Paraguay) and this new educational modality would have 1,200,000 users. Furthermore, a MEC publication informs that the platform Microsoft Teams will be used to access the courses, both in real time and recorded, and that more than 8,000 teachers are currently being trained in the use of Office 365 and Microsoft Teams.

Another example of the participation of the private sector is the initiative announced by Internet service providers Claro, Copaco, Personal, Tigo and Vox, according to which they are giving free access to MEC’s educational platforms “Tu Escuela en Casa” and “C3 Micro Cloud”.

In these times of health emergency, tech companies have been using the best of their abilities to provide answers and propose digital solutions. However, these initiatives are only patches to our damaged education system which, according to experts, has been in the ICU for decades. This situation raises several questions: could these technological implementations offered by the private sector generate more social gaps and inequality?; Is there a plan for carrying out an impact analysis of these measures and their short, medium and long-term effects?; Do we know which sector of our population will connect to these platforms?; Do we have any data and information on accessibility and use by the population?

According to a 2017 ECLAC document, Internet penetration increased in all countries and quintiles between 2011 and 2015. However, Paraguay has shown that Internet access remains highly unequal when comparing the richest and poorest households. In the richest quintile, access is 20 times higher than in the poorest one. Additionally, there is a connection gap of 20 percentage points between urban and rural areas.

Regarding affordability in fixed broadband service, measured according to the average price of 1 Mbps as a percentage of GDP per capita, Paraguay ranks fourth among the Latin American countries with the lowest affordability, with 2.2%. In other words, the cost of Internet access is high in relation to the income of its users. In addition to this, in terms of minimum rates for prepaid mobile broadband data packets, it is also one of the least affordable countries, at 1.5%.

A study on average mobile Internet download speed carried out by Opensignal in 2018 positions Paraguay in 13th place among 14 countries surveyed at the regional level, with 11.5 Mbps.

On the other hand, the Permanent Household Survey 2017 (EPH 2017) of the General Directorate of Statistics, Surveys and Censuses (DGEEC) indicates that 70.84% ​​of men and 72.92% of women access the Internet, although only 43.2% of households have access (this study does not specify the type of connection), while 56.8% of households do not have Internet access.

Data from the EPH 2019 indicate that 81% of school-age children and adolescents (from 5 to 17 years old) do not have an internet connection in their homes. Among those who access the Internet from computers, 39.9% connect daily, 35.6% between 2 and 3 times a week, and 22.3% once a week.

One of the problems that we find in the methodology of these surveys is how the data is revealed in a general way, without differentiating the type of connection. Whether the connection is flat (by wired copper or fiber connections) or mobile (3G or 4G) will determine the quality of the service and the access possibilities.

Training and competences in the educational sector

Regarding the capacities and competences in the educational sector, which includes the primary, secondary and higher levels, our country has had state programs in ICT training and digital literacy for quite some time, but there is not enough research to analyze the impact of these programs and their level of compliance. The most recent research analyzes the implementation of the Strategic Plan of the educational reform, Paraguay 2020, which aims to provide 3,467 netbooks within the framework of the “One computer per child” program in the Caacupé district. It would also provide Internet connectivity in the capital district and the Central Department to 132 educational institutions in the public sector through Conatel and to 158 others through Copaco, within the framework of the Interinstitutional Cooperation Agreement. In addition, 2 digital classrooms would be installed by executing the first phase of the ICT-based Digital Classrooms Pilot Project, with an estimated investment of 765 million guaraníes (about $130,000).

A publication by technology expert Matías Insaurralde, called “Paraguay: the country of Internet in the classrooms”, reveals that none of the plans prior to 2019 met their goals during the years of implementation. The following table shows the compliance rates for the plans through which the MEC trained its teachers in ICT, in the period 2016-2019:

These shortcomings in meeting the goals are also seen in the table of schools equipped with Internet connection, according to the Insaurralde publication:

As stated in the first part of this article, the major ISPs in the country (Claro, Copaco, Personal, Tigo and Vox) have released Internet access for MEC’s ​​online educational platforms.

In the context of the health emergency, it is essential to implement measures that connect teachers and students during the quarantine. However, given the precarious preparation of teachers and students in the use of ICTs and platforms, authorizing the implementation of online education to replace the face-to-face modality generates a more complex situation and increases even further the precariousness of education.

In an article we previously wrote for TEDIC on net neutrality, we highlighted the great risk that applying this type of positive discrimination to certain content applications has, which is that it distorts the users’ choices and makes the general Internet service more expensive, while preventing ISPs from investing in the necessary infrastructure to provide quality Internet to all people. The alternative to an expensive Internet is not giving users ‘zero-rating’ free access to a subset of applications such as WhatsApp or the educational platforms, because ISPs make strategic calculations to absorb these costs and then add them to mobile subscription rates, therefore increasing the price of unrestricted Internet. The fact of Paraguay being a country with scarce resources does not mean that it should only seek unambitious alternatives to providing quality Internet access.

We need policies, not products

The education industry moves $32 billion each year worldwide. According to an article by technology expert Natalia Zuazo, the sector has been going through a process of privatization for decades, from school texts to the training of teachers to ‘hack’ education, the gamification of classes, the purchase of equipment for ‘smart classrooms’, the outsourcing of ICT training, and many others.

The recent alliance between Microsoft and the government is an example of the company’s interest in the country’s and the region’s digital agenda, evidenced at the DAVOS meeting in 2016. According to experts, these acquisitions of free services are part of the process of privatization of education, which presents economic and cultural sovereignty issues, as well as others even more significant, compromising the future of education and our country.

In the article by Zuazo quoted above, the Argentinian PhD in Education Mirta Castelo affirms that a long-term sustainable education “does not mean taking shortcuts”, but rather “understanding the disciplines, their logics and their traditions”. She also points out that in the face of an overabundance of information in the age of Internet, the problem “is not information itself, but the relations betweendifferent ‘informations’”, and explains that these relations “are complex and can not be learned through machines, but through interaction with other human beings”.

Teaching becomes no more than using a technological product, which ensures profits for the industries of the sector but results in the loss of a true education policy based on local contexts and brings along collateral damages such as the worsening of the digital divide.

Let’s not increase the digital divide in Paraguay

Having access to Internet means having within our reach a tool not only for communication but also for multiple applications in all areas, to allow the social and economic development of countries. This health emergency should certainly serve to accelerate the long-delayed educational reform, but it is essential to carry out impact analyzes before and after the implementation of new technologies in it.

With the implementation of Office 365 and the absence of adequate ICT infrastructure, access and use skills, we will have as a result the increase of the digital divide in the country.

As evidenced by the studies and data on Internet access in Paraguay presented above, there are several dimensions to the source of this inequality: socioeconomic factors, because technologies are concentrated in the middle and high income sectors; geographic factors, due to the low penetration of technologies in rural areas; cultural factors, since there are some limitations to the use of technologies, such as the lack of content that addresses particular cultural interests, age ranges or gender (the results are mixed, but there is still a predominance of men in the use of technologies). There is no updated data, but it’s safe to assume that the lack of digital literacy and the lack of Internet access are a factor of school dropout.

A lack of knowledge about the adequate use of technologies prevents people from developing the necessary skills for the correct handling of information. A person who is digitally literate will be able to take advantage of the benefits of these technologies, while those who do not possess the digital skills to use them will be left behind. In this sense, we need more disaggregated data and more studies on the access and use of ICTs in the educational system, since we will not be able to generate solutions to the different realities if we do not have the necessary data.

At first glance, the application by ISPs of a ‘zero-rating’ discrimination for educational content on MEC platforms appears to be an economic benefit for the users. However, this generates a degradation in the quality of the service as a whole, that is, a precariousness and limitation in the access to the unlimited information offered by the Internet, which is usually not found in these educational packages and is essential to increase and deepen our knowledge.

This health emergency has given us the opportunity to think about our long-term future: what do we need to do in order to improve our educational system and make a real impact on our society?; are privatization, mere profit or ‘patch responses’ real solutions for our educational system? We hope that our educational authorities can learn from past mistakes and not let educational policies be outsourced under the guise of innovation.