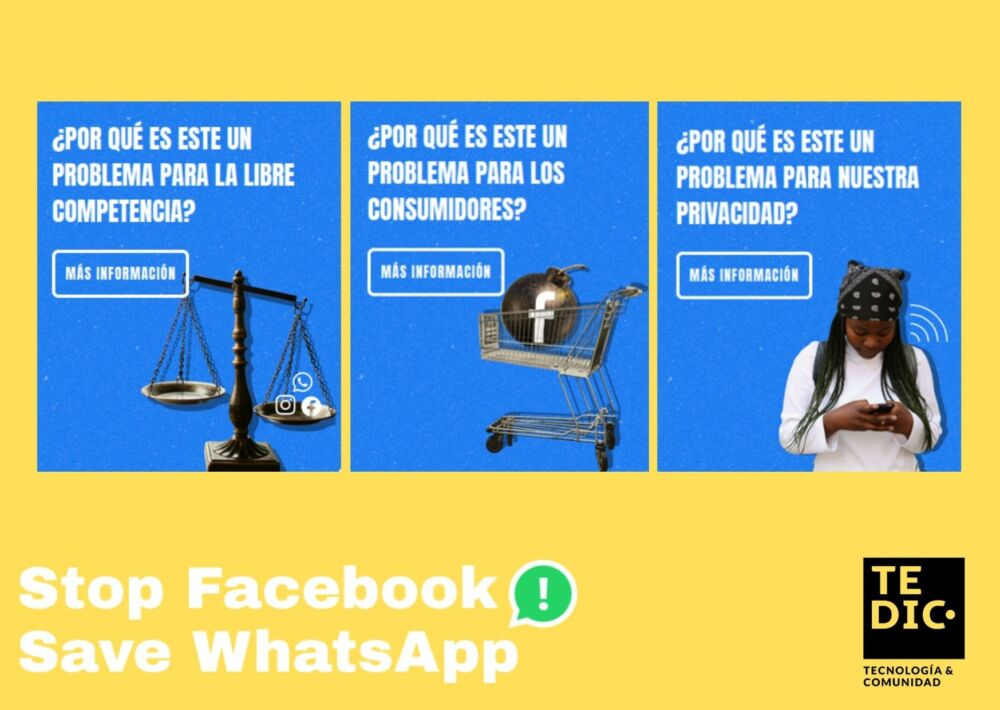 The imminent modification announcements in WhatsApp’s terms of service (ToS) and privacy policies – without alternative measures and imposing deadlines to accept the changes or give up app functionalities – generated a coordinated response from civil society at the local, regional and international levels.

From local to global

In TEDIC, we tried to understand the impact of ToS and privacy policy changes for Paraguay users from the beggining. From there, we joined articulations at the regional and global level.

At first, we presented the context of WhatsApp’s high degree of penetration at the local level. Such penetration, combined with the almost non-existent data protection legal framework, and local practices that use the application to share sensitive data, are essential points to understand the risks and disproportionate effects of the modifications for the Paraguayan population.

Subsequently, we develop a joint position with ALSUR, focusing on shed light on injustices based on offering more significant guarantees of personal data protection to users from the global North (compared to users in the South). We urged Facebook (WhatsApp’s parent company) to adopt better practices and offer the highest protection standards to all its users, regardless of their geographical location.

Moreover, we joined civil society organisations across the globe through the campaign #StopFacebook #SaveWhatsApp. By using explanatory videos, flyers and interviews with international media, the campaign sought to socialise messages that made Facebook’s market concentration explicit and how it affects free competition and harms users from various services offered by said company, with a particular focus on WhatsApp.

The campaign generated a high-level impact on numerous fronts. Concretely, competition and personal data protection authorities in India, Brazil, Argentina and others required the suspension of the modifications for being contrary to local regulations, invoking users’ privacy and security in their jurisdictions, and abuse of a dominant position.

Additionally, although WhatsApp initially established a deadline for people to accept the modifications, global pressure forced the company to extend such a deadline indefinitely. Later, it announced that it would not limit the functionalities to those who had not yet accepted the modifications. This is a true victory that demonstrates the power of global articulations with direct messages.

However, we must be careful not to fall into a false sense of permanent victory. Challenges and dangerous initiatives will most likely continue to emerge in the current context of technology companies and their impressive market concentration. Such challenges result from shareholders and global economic interests seeking profit from their investments at the expense of everything else.

The dispute for the respect of human rights in the digital environment continues to acquire new dimensions. It requires the maximum attention of digital rights organisations and regulators at the national and international level.

However, this convergence and learning must not stop here. It should be an invitation for civil society organisations, academic, and other actors to conduct studies to understand better how these disciplines are interconnected and seek a greater degree of protection for users in the online environment.

Finally, we must aim to strengthen how competition and consumer defence authorities understand the market dynamics of the digital environment. This understanding will achieve a greater degree of accountability and sanction abusive practices where necessary. Currently, WhatsApp is just one example of how abuse in such markets operates. The fight must go on.